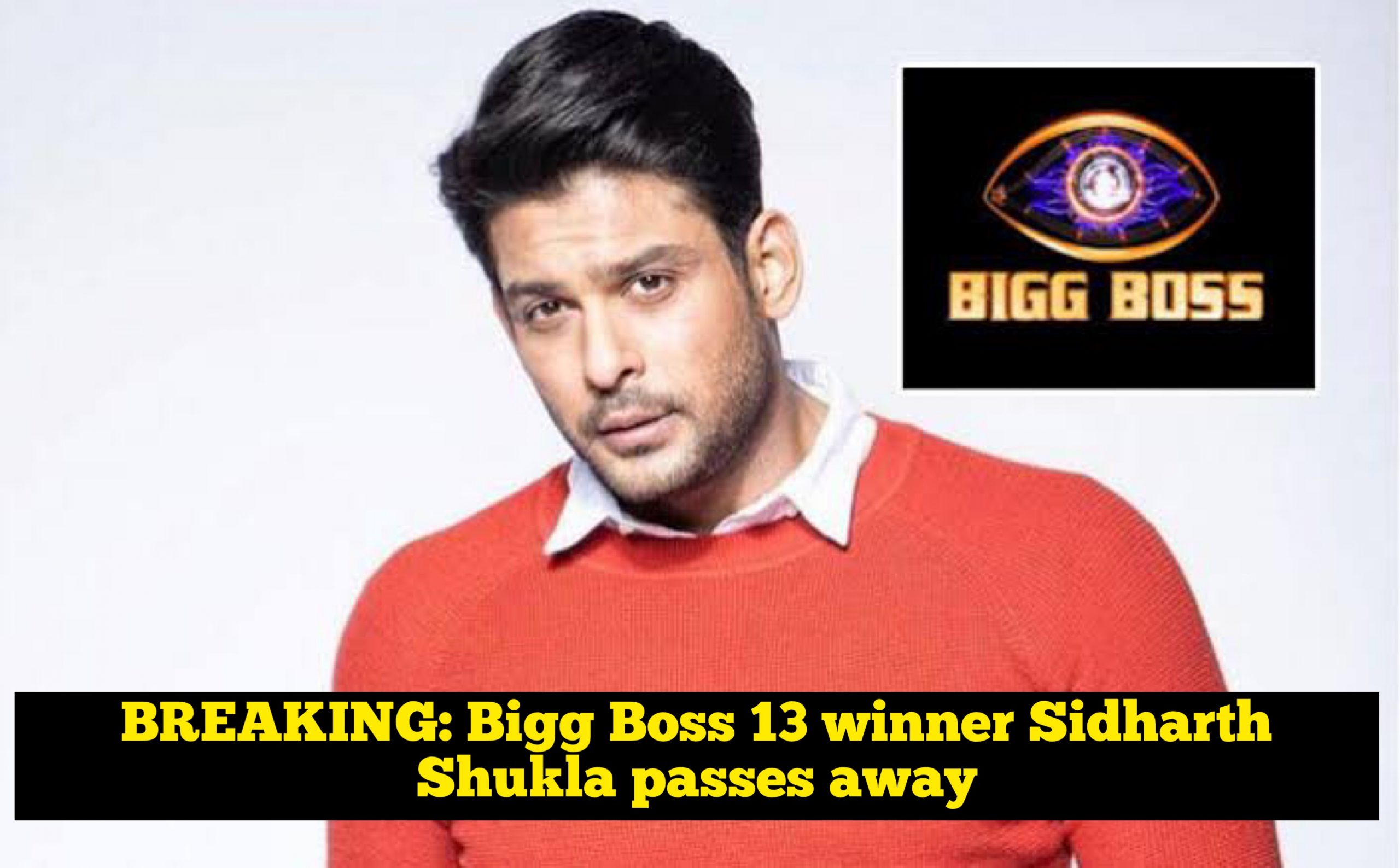 Bigg Boss 13 winner Sidharth Shukla passes away on Thursday. He was 40. Siddharth, the winner of Bigg Boss 13 was a popular face of showbiz and has been a part of films like Humpty Sharma Ke Dulhania.

Actor Sidharth Shukla passed died on Thursday, an official at the Cooper Hospital here said. He was 40.

Shukla suffered a massive heart attack in the morning it is learnt. He is survived by his mother and two sisters. This news came as a shock for his fans as the actor recently appeared on reality shows Bigg Boss OTT and Dance Deewane 3 with rumoured girlfriend Shehnaaz Gill.

Siddharth, the winner of Bigg Boss 13 was a popular face of showbiz and has been a part of films like Humpty Sharma Ke Dulhania. The actor’s last screen outing was Ekta Kapoor’s popular show ‘Broken But Beautiful 3’ in which he played the role of Agastya.

He completed his schooling from St. Xavier’s High School, Fort and later graduated in Interior designing from Rachana Sansad School of Interior Design.

Sidharth was also known for his strong friendship with his Bigg Boss co-contestant Shehnaaz Gill, which was often thought to be a romantic relationship. The rumoured couple appeared in several popular music videos together and were fondly known as ‘Sidnaaz’ by their legions of fans.

Television personality and actor Sidharth Shukla has passed away at the age of 40. Dr Sukhdeve of Cooper hospital has confirmed to indianexpress.com that actor Siddharth Shukla was brought dead to the hospital. The port mortem examination has not begun as the police procedures are still going on.

Sidharth Shukla made his acting debut with the Hindi TV show Babul Ka Aangann Chootey Na in 2008. This was followed by appearances in shows such as Aahat, Love U Zindagi and CID. However, Sidharth achieved his major breakthrough with the popular serial Balika Vadhu, wherein he played the main lead. Following this, Shukla made several appearances in reality shows such as Jhalak Dikhhla Jaa Season 6, India’s Got Talent, Khatron Ke Khiladi 7, Bigg Boss 13, as well as Bigg Boss 14.

Actor R Madhavan is “anguished” by the tragic demise of Bigg Boss 13 winner Sidharth Shukla. He wrote, “Heartbreaking and tragic. Rest In Peace brother. Just don’t have words to express my anguish.”

and had taken medicine last evening.

There was no external injury on the actor but his post mortem is still awaited. As per the sources, one of his sisters and his brother-in-law are at Cooper hospital.

Well known for being the winner of popular reality show Bigg Boss season 13, Sidharth Shukla started his career with the show Babul Ka Aangann Chootey Na. He later on appeared on shows including Jaane Pehchaane Se… Ye Ajnabbi, and Love U Zindagi but became a household name with Balika Vadhu.

Apart from Bigg Boss, he emerged as the winner of Fear Factor: Khatron Ke Khiladi 7. He hosted Savdhaan India and India’s Got Talent too. • During his stint in Balika Vadhu, Siddharth got into a cold war with actor, Shashank Vyas, over his share of role in the serial.

• Siddharth was not on talking terms with his Balika Vadhu co-star, Toral Rasputra.

• There was also a rift between Siddharth and his Dil Se Dil Tak co-star, Kunal Verma. Kunal criticised the actor for his bad behaviour on the sets of the show. He said, “Kunal said, “He is an unprofessional maniac and a psycho.
I think he needs psychiatric treatment again. I heard he had gone to rehab once and I think he needs to visit it again.”

• Siddharth is often criticised for being late on the sets of his shows and for creating a ruckus with his bizarre demands.
• Reportedly, he also got into a fight with his co-star, Rashami Desai, on the sets of the serial “Dil Se Dil Tak.” He refused shooting for the show as his vanity van was smaller than that of Rashami.

• Siddharth was even criticised by the media for his bad behaviour with a media person. Apparently, when a reporter tried to ask him about the news of him throwing tantrums on the sets of his shows, Siddharth removed his mic and walked out of the interview.Relationships & MoreMarital StatusUnmarriedAffairs/Girlfriends
• Drashti Dhami (Rumoured)