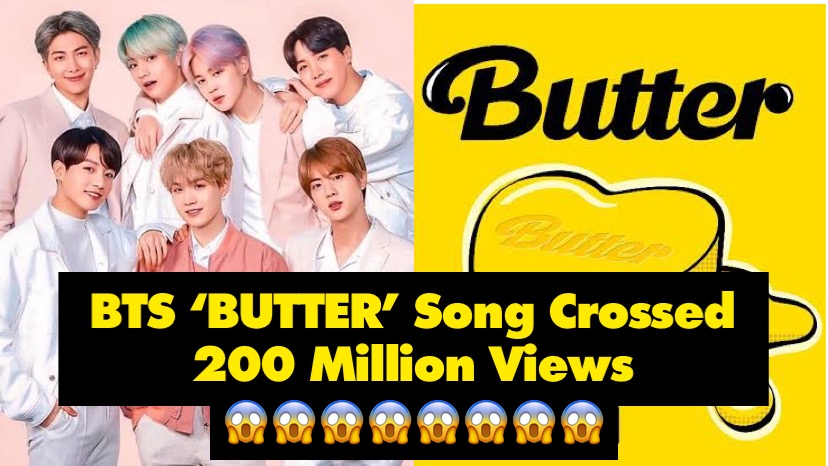 Bangtan Sonyeondan BTS who is also called Bangtan Boys has recently launched a new song “Butter” which has made everyone surprised. As it reached 3.89 million views when it was launched live in YouTube and made a record. BTS team said that they got Butter got millions of likes in just 13 minutes in youtube history and they got selected as the fastest music video on YouTube. Today (26/06/21) also it’s still trending in YouTube in music section, present it as 210 million views with 1.5 crore likes.

Butter song generally refers to two of pops biggest icons Michael Jackson and usher. Generally, the song opens with the lyrics “Smooth like butter like a criminal undercover.” As it is a nod from an iconic hit of  Michael Jackson “Smooth Criminal” this song was launched in the year 1988. And the second verse is inspired by Usher’s 2001 hit “U Got It Bad.” The song sees Usher helplessly falling in love with the girl he’s had his eye on, but after Butter song boys were said to be so charming and smooth which makes people all in love with them and dance.

RM, Jin, Suga, J-Hope, Jimin, V and Jungkook are the members of the song. They said that it’s the summer dance-pop track. They said they’re gonna have a very unique style according to the retro vibe. RM coloured his hair pink.

Jin and Suga sported their natural black hair. Jimin made his hairstyle multicoloured, V went with an undercut and Jungkook with a short ponytail.

Also Read: The Most Awaited Series The Family Man 2 Is Going To Ban? | Prakash Javadekar

Butter is a very fun song and very lively. It’s also melodious type and it’s addictive too. Jimin said that the song is smooth and easy to pop.

BTS released their first song on June 12, 2013. They almost include Japanese and Korean in all their albums. Every album has a story that is related to them.

Ultimate record of BTS from starting to now

They are also featured on Time’s international cover as “Next Generation Leaders“.

Kim Seok jin. Born on Dec 4, 1992, the oldest member of the group he is from guache in the province. He is also known as WWH(worldwide handsome.) He is well known in Korea for his polite n humble behaviour he is very bubbly and an outgoing introvert. He is famous for his “dad jokes“.

Suga aka Min Yoongi is a rapper and main producer for the majority of BTS songs. He is the 4th fastest rapper in South Korea. He is a complete introvert. His studio is called “genius lab”. He produced many songs for other artists and is famous for his talents as a producer in both the Korean and American music industry.

Jin and Suga both are amazing chefs. When their company was about to go bankrupt both jin and suga took up the duty of taking care of and feeding the members when they were trainees at bihgit (currently HYBE labels).

Jhope aka Jung Hoseok. He is the rapper and lead dancer of the group. He is also in charge of choreography for few songs and he keeps a check on the member’s dances when they are on world tours before joining BTS as a trainee he was a member of an underdog dance group called neuron in Gwangju province. Jhope was popular even before his debut.

He got multiple requests from big companies like jyp and sm to join them but he declined those offers to join BTS and bighit ent. He is also known as the sunshine of the group as he has the brightest smile and he never gets angry at his Dongsheng (younger brother in Korean). He is very famous in the industry for his terrific dance moves and his grace while doing them.

KIM namjoon. he is the LEADER of the group and until 2016 the only English speaker of the group. His first stage name was rap monster but now he has changed it to RM(real me). He told that, he learned English from the famous show FRIENDS. He has an IQ of 148 and is the “brain monster” of the group.

He plays a major role as the mental supporter of the group and he is a pure genius when it comes to solving riddles or puzzles and writing some of the most beautiful lyrics and delivering powerful messages through them. His beautiful lyrics and the messages within are one of the major reasons behind the success of BTS as a group.

Park Jimin aka mochi or angel of the group. He is also one of the major dancers of the group he is well trained in ballet and contemporary form of dances.

RM is a rapper. Jimin is a vocalist and is well known for being one of the best dancers among the idol. He is charming and very understanding towards the members. He is the fashionista of the group and is also the trendiest members he is known for his playful attitude and at the same time empathizing attitude.

The next member is Kim taehyung stage name is V he is popularly known as CGV(computer graphics V) for his extremely gorgeous face that looks more like a computer effect that can’t be real. He is also a vocalist. And is famous for his deep voice. He also acted in a drama named hawarang. He has many celebrity actor friends and has the biggest friends circle.

Last the maknae (youngest in Korean) of the group jeon jungkook. He is called the golden maknae of the Korean music industry as he is good at everything he does.

He is the main vocalist and also a pro gamer. He even trained in us for his vocals and dance. Jungkook has a golden voice and can hit high notes very easily. Jungkook debuted at a very young age and he came to Seoul when he was just 15yrs old and he was practically raised by his bangtan hyungs (Korean for older brother) he is closest to jin. He had the third-best dancer in the group and is known for his dynamic moves and good looks. He is one of the only members with tattoos.