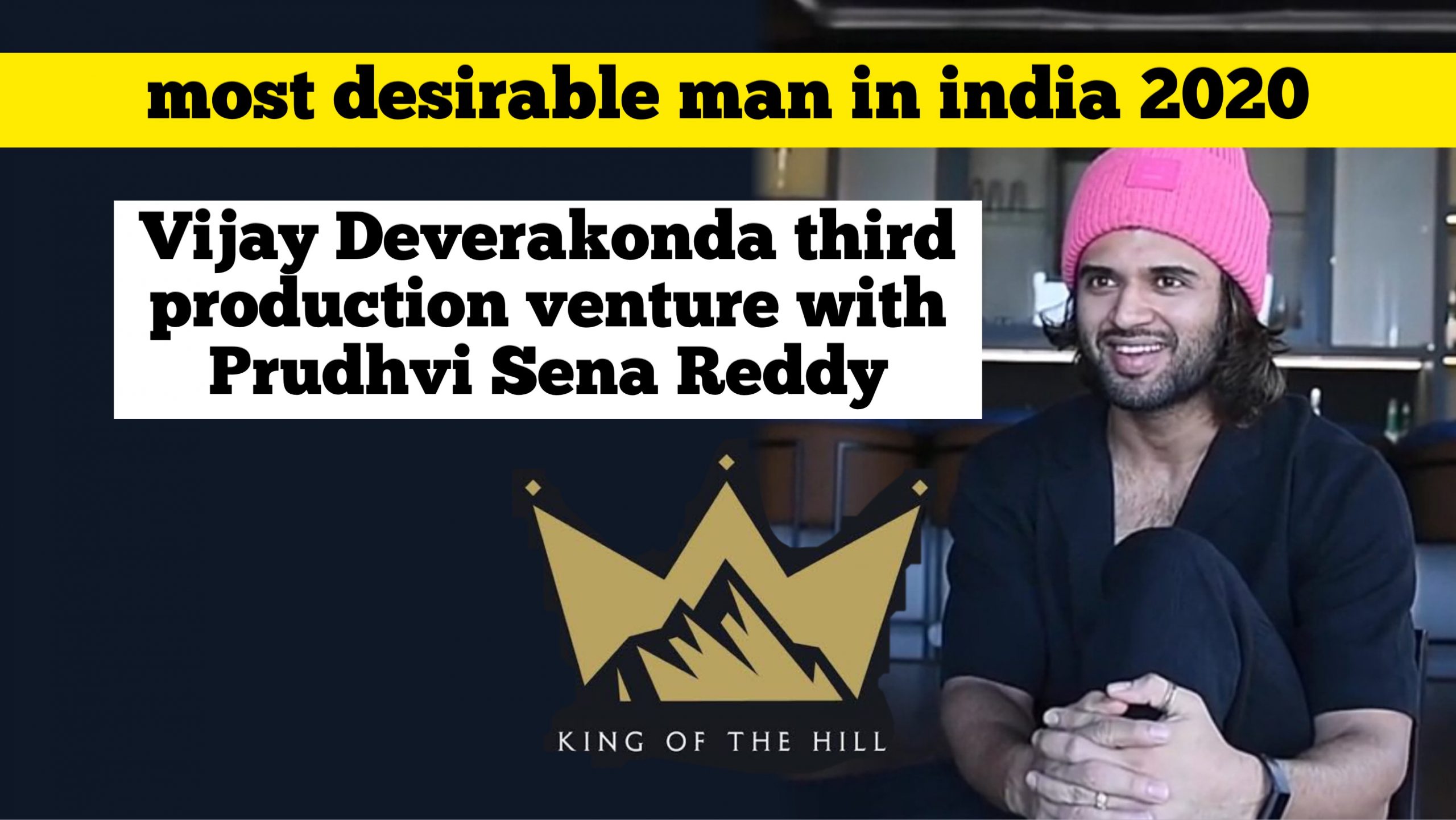 Now, this is the third venture by Vijay’s production house which being administrated by debutant Prudhvi Sena Reddy.

Presently, everyone excited to know who will play the lead roles of that upcoming unnamed movie and yet information about it. Due to lockdown, more details are not known; Vijay Deverakonda will announce more information soon about this movie.

Actor Vijay Deverakonda is currently working for this upcoming Pan India movie named Liger, which was channelled by Puri Jagannadh and brought on by Karan Johar, Charmme Kaur publish under Puri connects and Dharma Productions banner.

Vijay Devarakonda once again created a record by becoming the Hyderabad Times Most Desirable Man Consecutively three years. We all can see he just made a hattrick.

He deserves every bit of it, as we can see how well he carries his style with great ease. In the year 2016, he was a new entry, and he was in 20th position of Hyderabad Times Most Desirable Man, within no time that In a year, 2017 he was in 2nd position. Just within a year, he proved himself. Then he started creating a history he topped the table in the year 2018 for the first time, the same continued in 2019. Now, he made history by Becoming the Most desirable Man 2020. Vijay Devarakonda is a “Great achiever ”.

About Vijay Deverakonda Production House ( King Of The Hill Entertainment)

This movie is a comic genre that also involves some suspense. Vijay Devarakonda also gave a guest appearance in this movie In a song called “raavoy Katha chepta meeku matrame chepta”. This movie had very high expectations at the box office as it was Vijay’s first movie as a producer and the cast.

The cast, the production house, The trailer created enormous expectations for this movie. Meeku matrame chepta could not do wonders at the box office, but this a comic film, which made people in the theatre laugh like hell and this movie also has some twists and turns that makes you stick to the seats. We can enjoy the film a lot.

The second movie under Vijay’s production house is “Pushpaka Vimanam”, in which his brother Anand Devarakonda is playing a lead role. This movie has super-duper expectations. Because Anand Devarakonda did a very great job in his debut movie “Middle-class melodies”.

After watching this movie, we can say that Anand Devarakonda has a different good acting sense. We all can expect a great film from him in the future. Pushpaka vimanam is a  bumper Devarakonda combo as it involves both the most talented Anand Devarakonda under the production of Vijay Devarakonda.

Through his, we can see that Vijay is very passionate about the film and film industry. So he is striving to give many tremendous and blockbuster films through his production house. Vijay Devarakonda made his mark in south India with his movies and his fantastic acting, and now he is on his way to create a spot in the production.

Vijay Devarakonda is a self-made superstar who proved himself in many movies. Vijay Devarakonda gained fame mainly through “Arjun Reddy”, this movie made miracles at the box office, and his acting in this film was mind-blowing.

Vijay Devarakonda not only gained fame in south India, but he also gained notoriety in the whole of India and in many countries too. Vijay Deverakonda is the National Crush Of India in 2021.

Vijay gained massive popularity among female fans. He has a great fan base. He created wonders through his films like Arjun Reddy.

Arjun reddy is a movie that is a romcom fill with MBBS as a baseline.

His looks in every movie are just fantastic, and this gained a huge fan base.

Vijay Devarakonda’s upcoming film is “Liger”, a pan India film; Ananya Pandey is the Female Lead. As a heroine in this film, she is a Bollywood actress and the daughter of Chunkey Pandey. She gained fame through the student of the year, Pathi Patni aur Woh. Charmi Kaur and Karan Johar are producing this. This movie now has enormous expectations, and this movie being a pan India film, could bring great fame to the South Indian star Vijay Devarakonda.

As we all know, Vijay Devarakonda is a self-made actor. Before becoming a hero, he played many roles in life is beautiful and evade Subramanyam, and his first film as a lead actor was Pelli Choopulu.

Vijay is the most talented actor and gained colossal fame through “ARJUN REDDY.”

Vijay Devarakonda also did a guest role in the hilarious comic movie “JATHIRATNALU.”

Vijay Devarakonda is the first South Indian to have 12 million followers on Instagram. Through this, we can say that he gas pretty much fan following not only from southern states of India but also from India.

Vijay Devarakonda made his mark in south India with his films by his fantastic acting, and now he is on his way to create a spot in the production.

We all can expect excellent and outstanding films under his production house. A tremendous upcoming film from Vijay Deverakonda ’s  production house and the name of that film brings many memories.

The third film under Vijay Deverakonda  production house would gain a great response from the audience.

Also Read: The Most Awaited Series The Family Man 2 Is Going To Ban?

Anirudh Paka is a professional Blogger and admin of Vijay deverakonda fans page(thedeverakondaf) which is a community of 3 lakhs users and growing.