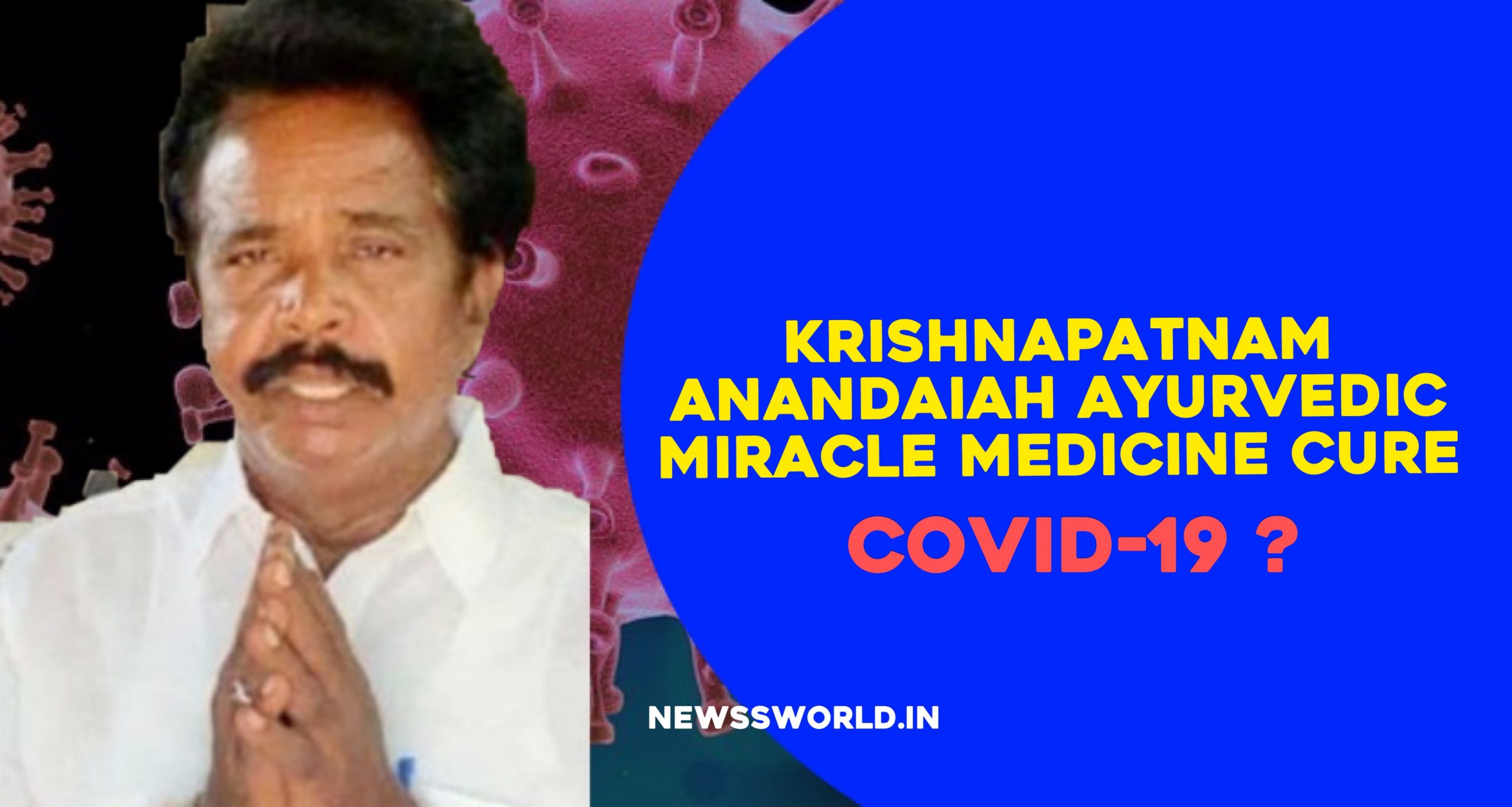 Krishnapatnam’s  Miracle Medicine To be tested by ICMR.

The krishnapatnam’s medicine is said to be a cure for COVID. It is made by a person named Anandaiah, who belongs to krishnapatnam village of Nellore district.

This medicine is being called a miracle medicine by many people of Andhra Pradesh as it cures corona within no time and with no side effects. This is Ayurvedic medicine which is made of herbs that are used in our daily life.

Anandaiah started distributing this medicine from Sri Rama Navami (21st of April) to the people of his village. In the beginning, very few people took his medicine, as time passes thousands of people started to gather in krishnaptnam from different villages around and also from different districts of Andhra Pradesh.

For few days, people from Tamil Nadu, Karnataka and many other places are reaching krishnapatnam to take the miracle medicine from Anandaiah which is effectively curing corona without any side effects.

Anandaiah uses a different kind of herbs which are normally used by us in our day to day life.

This “I” type medicine is put in the “eyes” of the patient who has decreased oxygen levels. In many cases, by putting the medicine in their eyes there is an increase in oxygen levels and by this, all the people around started believing this Ayurvedic medicine made by Anandaiah. He also provides medicine to each one for free without even taking a penny.

As this medicine became popular in no time, many people who took this medicine and became free from corona started providing herbs in large quantities to ananadaiah, the people of krishnapatnam started volunteering for Anandaiah by helping him in preparing the medicine.

By seeing the result of this medicine thousands of people started reaching krishnapatnam. To date nearly “70,000” people have reached krishnapatnam and have taken the medicine.

This news was spread to different places and this even reached the government.

The collector of that area made a committee and reached krishnapatnam and started enquiring about this medicine, about its effect, & even about the ingredients used in it and the method of preparation.

The whole report was provided to the government of Andhra Pradesh. The report says that the medicine has to be certified and says that Anandaiah does not hold any degree to prepare that medicine and to even provide that medicine.

By considering all the above situations & all the happening conditions government sent the AYUSH team & ICMR TO  krishnapatnam to test the efficacy of the medicine made by Anandaiah.

Anandaiah said that the medicine is not available and he will halt the process for 2 days.

The AYUSH Team sent by the government to test the medicine says that “No Side Effects” – Ayush Commissioner Ramulu Naik on Anandayya Corona Medicine, but this is Ayurvedic medicine and also says that the ingredients used in the medicine are not harmful and these are the herbs used by us in our normal daily life.

It also says that the tests are going on how the medicine is prepared by using which techniques.

AYUSH also states that the results of the test will be given in a few days & then the usage of the medicine will be clarified.Along with the AYUSH, the ICMR Team has reached krishnapatnam.

The ICMR will start testing the medicine from tomorrow i.e, on the 24th of May.

By investigation, it has been known that nearly the whole people of krishnapatnam are Covid free & the people are not even wearing masks. The Government hospital of Nellore is also having very few corona patients.

By seeing all these situations, people started trusting Anandaiah’s Ayurvedic medicine. They all started supporting Anandaiah and are also opposing the government

The people say that “we put lots of money in many hospitals and we don’t have 100% trust that we will be cured, but this medicine is for free and there is no risk, then what is wrong to try?”

People feel that during this situation the Anandaiah’s medicine should not be stopped as it does not cause any harm.

AYUSH team also says that the herbs used in the medicine are normally used in Ayurvedic medicine to cure the cough, cold and the other symptoms that are seen during corona.

Everyone feels that government should not take much time to test the medicine, as corona cases are not getting decreased. During this time this medicine should be given at most priority and should be tested fast and should be provided to the people.

An incident took place in krishnapatnam where a person whose oxygen levels were very less rose higher when the medicine was put into the eyes of that person, they say that he also took treatment, but nothing has changed and by taking this medicine the persons’ oxygen levels
rose and he becomes normal in no time.

Also Read :Explained: What is the Narada bribery case?

By this many people have started trusting the medicine made by Anandaiah and everyone are likely to give a try as it doesn’t cost even a penny and it is not even having side effect as AYUSH team stated.

So, Many people are interested to take this medicine and are even trusting this medicine by looking at the surrounding situations.

Anirudh Paka is a professional Blogger and admin of Vijay deverakonda fans page(thedeverakondaf) which is a community of 3 lakhs users and growing.